Norm Finkelstein in an interview on January 2nd:

Press TV: Israel's Foreign Minister Tzipi Livni said that Israel has affected almost what it called the infrastructure of terrorism presumably meaning Hamas. This while apparently heavy civilian casualties have been incurred inside Gaza. How do you see the imbalance in the loss of life in Gaza? How successful do you think that Israel has been in wiping out Hamas or the resistance if you will?

Finkelstein: Well the purpose was to inflict massive casualties immediately. The Israelis, after their attack on Lebanon in 2006, realized that their error was that they did not unleash the full might of their air force in the first few days. In in the first two days of Lebanon war, they killed about 55 Lebanese and then they targeted the Dahia suburb of Beirut. After the war, they began talking about the Dahia strategy which meant to obliterate anything which went against their rule. And what you saw in the first couple of days in Gaza was the application of the Dahia strategy to commit a bloodbath and slaughter of such huge dimensions that they thought it would deter the Arabs in the future from defying Israeli rule.

"What happened in the Dahiya quarter of Beirut in 2006 will happen in every village from which Israel is fired on," said Gadi Eisenkot, head of the army's northern division.

Dahiya was a Hezbollah stronghold that Israel flattened in sustained air raids during a 34-day war with the Shiite group two years ago.

"We will apply disproportionate force on it (village) and cause great damage and destruction there. From our standpoint, these are not civilian villages, they are military bases," Eisenkot told the Yedioth Ahronoth newspaper.

"This is not a recommendation. This is a plan. And it has been approved," Eisenkot added.

This is what happened in Dahiya: 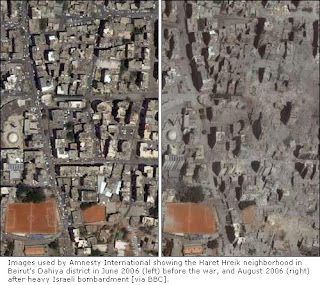