We had to destroy the village in order to save it

No, really! I mean, really! 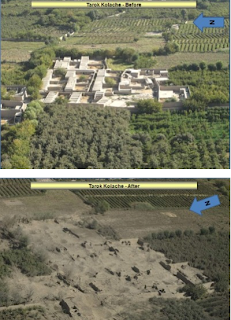 This is a before and after of the village of Tarok-Kolache. Spencer Ackerman has more.
Posted by empty at 8:56 AM 9 comments:

Labels: The village of Tarok-Kolache

Why Assange and not Woodward

Stephen Walt at Foreign Policy has a good question. Why are there no calls to prosecute, assassinate or otherwise inconvenience Bob Woodward who has had a lucrative career peddling highly sensitive leaks, while the establishment (including establishment journalists) is apoplectic about Julian Assange. The answer Walt provides is eminently reasonable. Woodward is an insider, a member of the elite, and:

Elites like the idea of being in charge, and they don't really trust "the people" in whose name they govern, even though it is the latter that pays their salaries, and fights their wars. Elites like the sense of power and status that being "on the inside" conveys: it's a turn-on to know things that other people don't, and it can be so darn inconvenient when the public gets wind of what the current "best and brightest" are actually doing.

Headline of the day

So the much talked about negotiations between Karzai and the Taliban with the help of NATO turns out to be a scam. At least we got this headline out of it.

Our strategy in Afghanistan based on "nation-building." We hope to create Afghan institutions that can run the place so we can leave. That goal, in turn, is predicated on the belief that the United States and its allies have sufficient knowledge and skill to create something that has never existed before: an effective, efficient, legitimate, Western-style state in Afghanistan. Accomplishing this task requires that we understand the underlying culture, the history, and the cross-cutting cleavages within Afghan society, and that we have sufficiently intimate knowledge of the players to know whom to work with and whom to shun.

There was already plenty of evidence that this knowledge was lacking. After all, back in 2002 we thought Hamid Karzai was the ideal choice to lead a new Afghan government. Now, nearly eight years later, he's proven to be a disappointment (at best). And this latest fiasco merely underscores the degree to which we are out of our depth there. There's no question we can kill a lot of Taliban (or people we suspect might be Taliban, or unfortunate civilians who get in the way), but successful nation-building requires a lot more than that.

So here's Rule No. 1 for would-be Afghan nation-builders: If you can't tell the Taliban from the imposters without a scorecard, maybe you shouldn't be playing this game.

Documents from the latest Wikileaks release covering the Iraq War is available at the Guardian and the New York Times. A lot of the information that the New York Times did not see as fit to print in real-time is available in these documents. However, the pride of place in the Time's coverage goes to a hit piece on Julian Assange, the founder and face of Wikileaks.
Guardian: 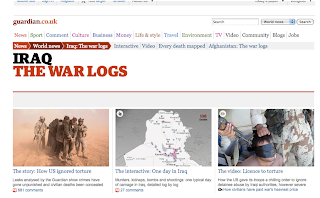 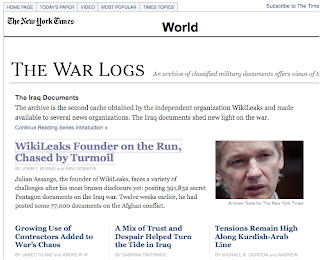 The piece repeats the canard that Wikileaks previous document dump put lives in danger, despite the Pentagon's admission that no harm to anyone in Afghanistan could be tied to the Wikileaks release. As documented by the invaluable Glenn Greenwald:

It's been clear from the start that -- despite the valid concern that WikiLeaks should have been more vigilant in redacting the names of innocent Afghan civilians -- the Pentagon (and its media and pundit servants) were drastically exaggerating the harms, as The Associated Press noted on August 17:

The WikiLeaks leak is unrivaled in its scope, but so far there is no evidence that any Afghans named in the leaked documents as defectors or informants from the Taliban insurgency have been harmed in retaliation.

Some private analysts, in fact, think the danger has been overstated. "I am underwhelmed by this argument. The Pentagon is hyping," says John Prados, a military and intelligence historian who works for the anti-secrecy National Security Archive. He said in an interview that relatively few names have surfaced and it's not clear whether their present circumstances leave them in jeopardy.

And on August 11, even the DOD was forced to admit to The Washington Post the complete absence of any evidence to support its wild accusations: "'We have yet to see any harm come to anyone in Afghanistan that we can directly tie to exposure in the WikiLeaks documents,' [Pentagon spokesman Geoff] Morrell said.

What is interesting in the hit piece is the petulant tone of John Burns. One would have thought the pride of place would have been a mea culpa from Mr Burns explaining why the picture painted by the Wikileaks document was so different than what was conveyed by his reporting. But then, Mr. Burns is a "serious" journalist.
Posted by empty at 12:18 PM 1 comment:

Be afraid, be very afraid

Muslims wearing garb.
Posted by empty at 7:18 PM No comments: