Our war against teenagers

Glenn Greenwald does have a way of getting to the heart of things.

Speaking of war propaganda, today is a very proud day for the U.S.: the military commission ordered by Eric Holder begins for Omar Khadar, a Canadian-born, Afghanistan-residing detainee encaged at Guantanamo for seven years -- since he was 15 years old -- on "war crimes" and "terrorism" charges that he was involved in a firefight with American military forces who, revealingly enough, were using a former Soviet military base as their outpost. Khadr was wounded in the battle, imprisoned at Bagram, then at Guantanamo, claims he was severely tortured into falsely confessing, and made worldwide news when a video of him weeping, begging for medical help, and crying for his mother during an interrogation was released. Apparently, if the U.S. Army invades a foreign country, anyone who fights against that invading force -- including a 15-year-old boy -- is a "war criminal" and a "Terrorist," even the Worst of The Worst, which is, of course, all that we're currently holding at Guantanamo. Now that's some robust propaganda.

When the network that hosts the show starts getting all weird about it, though, that’s a problem for Muslims. Because this large media conglomerate is regularly and repeatedly signalling that, even if they’re willing to stand up to angry Baptists or Jews with hurt feelings, pissed off Muslims are so scary and weird and “other” that they have to be handled with kid gloves. I know plenty of fucked-up Christians who I’m sure have sent angry letters and phone calls to Comedy Central about South Park.

And fear is just the submissive expression of hostility.

I want someone on Capitol Hill to give a shit.

So says Dan Froomkin wondering whether any of "our" elected representatives cares about what appears in the wikileaks video.

So far (and I've done a bit of calling around) I haven't heard any member of Congress express any intention of holding an oversight hearing into the matter -- or even asking any questions at all.

They seem utterly uncurious about how exactly it was OK for a bloodthirsty-sounding helicopter crewman to open fire on a group of (apparently) armed men when all they were doing was milling around on a street corner -- not to mention how it was OK to target the Good Samaritan van driver who pulled over to help one of the injured men. (He was killed; his two small children were wounded.)

Even more than that, to be perfectly honest, I want someone on Capitol Hill to give a shit about the gruesome cover-up by U.S. forces in Afghanistan after they massacred five innocent civilians, including three women, two of whom were pregnant -- just this past February. Just not on video (as far as we know).

In case you missed it, the very same morning the WikiLeaks video was released, the New York Times confirmed reports by heroic Times of London correspondent Jerome Starkey that American Special Operations soldiers actually dug their bullets out of the bodies of the women as part of a cover-up. NATO headquarters, led by Gen. Stanley McChrystal, then backed them up and repeatedly tried to discredit Starkey and his story.

Is that standard operating procedure? Again, I haven't heard a peep of interest from the Hill -- despite the fact that Starkey himself has argued that it was not an isolated incident, and that U.S. and NATO forces are rarely held to account for the atrocities they commit.

Where's the outrage? Where's the responsibility? Where's the oversight? Hell, where's the basic curiosity? Has anyone on the Hill even asked any questions of the Pentagon or the White House? Hey, President Obama, are you OK with this?

Does your member of Congress give a shit?

He has a suggestion

Call them and let me know what you find out.

AlJazeera has an analysis of the Wikileaks video with Julian Assange and Ivan Eland. Eland is basically representing the US military point of view (h/t Pulse): 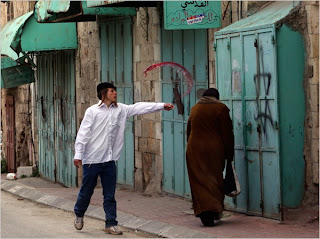 A Jewish settler tosses wine at a Palestinian woman on Shuhada Street in Hebron, the West Bank. (h/t War in Context)
Posted by empty at 11:55 PM No comments:

The cancer of unemployment

This is a visualization of the change in unemployment rates over the period of a year developed by LaToya Egwuekwe, a graduate student and member of the Machinists Union. It's scary. (h/t Paul Rosenberg)

Now, is this video disturbing? Of course. Were atrocities committed, innocents slaughtered, corpses desecrated and children maimed? Absolutely. But was it all done according to proper procedure? Ah, now, that's the question. We should all certainly be willing to support a full and complete investigation into the possibility of an official recommendation for preliminary motions toward an investigation, looking into the matter of whether or not the people here were properly murdered in triplicate, signed twice on the goldenrod form, in accordance with the Code of Canon Law. And we shouldn't rest until any guilty parties have been found, and strongly-worded disciplinary Post-Its firmly applied to their personnel files.

Murder in our name

Wikileaks has released this video from a Blackhawk helicopter showing one example of the slaughter of Iraqis in 2007. The US had claimed that the helicopters reacted to an active firefight. What is totally nauseating is the murder of the neighbors who come to help the wounded. Watch.